This is Part 4 of the 360° underwater panorama tutorial series by Richard Chesher. Read Part 1, Part 2 and Part 3. The last installment will be published next Friday, so watch this blog!

Keeping the camera stable relative to the sphere center

Just as on land you need to rotate the camera around the nodal point of the lens and keep it level. The problem is that the camera and the camera case is big and subject to movement by wave action and currents. There is no “nodal ninja” for your underwater work and a tripod can be a hassle when swimming to and from a photo location and getting in and out of a dinghy. Also if you want to use a tripod solid enough to hold your camera steady you need to put heavy weights on the end of each leg to keep it in place. I’ve tried this and quickly decided to do it another way.

There are three “levels” of sphere placement – very close to the bottom (less than half a metre) – near the bottom (about a metre off the bottom) and midwater (more than a metre from the bottom).

I made a bracket for my Ikelite housing out of aluminium. The ends are bent as shown in images above so the attachment holes are located above and below the nodal point for the lens. The upper attachment is next to the shutter release lever so I can hold the upper attachment and trigger the camera manually.

For spheres very close to the bottom or near the bottom I use a monopod – a length of 25-mm wide aluminium – attached to the lower camera bracket with a bolt and wing-nut. I use a 200-mm length for very low level spheres and a folding length 500-mm long for images 500-mm to one metre from the bottom (see image 1). Here is a sphere image taken with the monopod at half a meter from the bottom:

When shooting, I am positioned above and behind the camera rig holding the upper bracket. I turn myself and the camera rig in a 360 circle while taking as many shots as possible (usually 19 to 20) while watching the monopod to be sure it stays relatively perpendicular to the bottom. Before I begin, I take a vertical down shot and a vertical up shot. When I take the up shot I need to hold my breath long enough so the surface is not disturbed and there are no bubbles in the scene.

For mid-water spheres I use a surface float with a string to a small folding anchor. 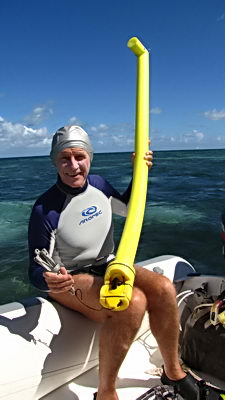 The float is a swimming pool “noodle”. A surveyor’s chalk line spool with the chalk line replaced with fishing line is attached to one end of the float (see photo above). I hook one fluke of the small folding anchor under a dead coral rock and then roll in the line until the float is about half submerged. Surface waves do not disturb the float because it is in a vertical position. I then swim down and attach the camera at the preferred location by simply looping the fishing line around the bottom and top bracket. Then I position myself behind and above the camera and swim slowly in a circle taking about 20 images per 360 degrees and holding the camera so it stays level and so the line stays vertical (see the photo at the beginning of this blog post). Finally, I carefully note the location of the camera relative to some bottom feature and then remove the camera, roll up the line and give the float to Freddy who swims it out of view while I dive down again to take the down and the up photo.

Both the monopod and the noodle technique can be difficult where there is a current but it still works if you are careful and can compensate for it. Surface waves don’t make much difference as long as they are not too big or causing horizontal surge at your location.

The major problem of both techniques is the monstrous, alien, killer ape (me) smack in the center of the sphere. Except in special reserves where the fish are happy to swim with tourists – like the photo at the Amedee Marine Reserve image above – reef creatures prefer to stay as far away as possible from monstrous alien killers. Even where the fish are not chased, speared or netted, schools of fish are difficult to get close to and refuse to stay around while I set up the camera rig and take the sphere image. So I replaced the monster with a robot (mentioned in the last part of this tutorial series). The robot takes the sphere photos while Freddy and I swim elsewhere.

This is Part 4 of the 360° underwater panorama tutorial series by Richard Chesher. Read Part 1, Part 2 and Part 3. A new installment will be published every Friday, so watch this blog!