The naughty side of VR

“We think the VR [virtual reality] ecosystem is in its ‘2007-smartphone’ moment in terms of the adoption cycle,” the analysts write in a 68-page note published on Thursday. “It took four to five years for smartphones to reach 100 million users in the U.S., we expect a slower adoption curve for VR, but still strong enough for an enormous market.”

“A report by advisory firm Digi-Capital estimates that the augmented and virtual reality market will grow to be worth $150 billion by 2020. Companies pioneering the technology behind the exciting new mediums are well positioned to flourish if mainstream adoption can finally be achieved. (For more, see: Virtual Reality Will Be a Billion Dollar Business.)” 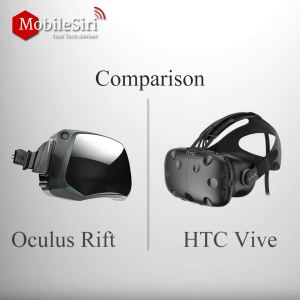 “From the early verdict, it’s hard to call a winner between both of the headsets. Both of the headsets have lots of similarities, but the difference to note here are how these two devices take the most out of the specs. While the Oculus Rift is designed for seated position primarily, the HTC Vive is meant to be used while moving around in a mall space. We have to wait until both headsets are finally out in the market.”

The VR Industry Is About to Make a Serious Mistake

“Paypal, YouTube, Squarespace, the Google Empire, Blab, Instagram, and Shopify. Those are the real game changers and none of them were even a blip on the radar in 1995 when internet millionaires were being minted monthly. Each of these companies vastly improve the quality of life for millions in ways great and small. None of them are a straightforward online versions of x, y or z.”

“Leave aside the issues associated with tracking objects in the real world in order to know how to virtually modify and interact with them. Leave aside, too, the issues associated with tracking, processing, and rendering fast enough so that virtual objects stay glued in place relative to the real world. Forget about the fact that you can’t light and shadow virtual objects correctly unless you know the location and orientation of every real light source and object that affects the scene, which can’t be fully derived from head-mounted sensors. Pay no attention to the challenges of having a wide enough AR field of view so that it doesn’t seem like you’re looking through a porthole, of having a wide enough brightness range so that virtual images look right both at the beach and in a coal mine, of antialiasing virtual edges into the real world, and of doing all of the above with a hardware package that’s stylish enough to wear in public, ergonomic enough to wear all the time, and capable of running all day without a recharge. No, ignore all that, because it’s at least possible to imagine how they’d be solved, however challenging the engineering might be.

Fix all that, and the problem remains: how do you draw black?”

“Survey respondents listed travel, viewing infrequent live events (such as the Olympics), seeing concerts, and playing sports as their top wants for a virtual reality headset.

Of note, given that much of the initial focus on VR headsets has been around gaming, use of a VR device to play games and viewing sporting events rank in the bottom two interests for the general population.”

More than a decade is a long time in the technology industry. And Zuckerberg’s sober assessment stands in stark contrast to recent enthusiasm for virtual reality that he is in no small part responsible for.”