I was pointed to this tweet by my twittering colleague today.

As it turns out (as if it would be any surprise), I have been planning also to make a new “world record” image which would surpass the Prague gigapixel I shot last year.

It’s funny, in the very early stages of my addiction to all things panoramic, I remember the fascinating image and story of Max Lyons and his Gigapixel image. Not to belittle the efforts of the people shooting gigapixels these days, but wow, this guy was a real man. He had to actually move the camera by hand, no motorized robotic thing to move the camera with a tolerance of 1/100th of a degree. He had to actually find and record corresponding pixels in each pair of images. No SIFT, no Autopano, or PTGui, none of that. In fact Max started programming himself (creating PTAssembler in the process) only to achieve his goal. Yes, people used to be tougher, as we’ve said over and over, since the times of the ancient Greeks.

Now we have all manner of robotic camera mounts, and we have a great deal of sophisticated and very good panoramic image creation software. It is even possible to create an image ten times larger than Max Lyons’ record breaking gigapixel image with a gigapan unit and a point and shoot camera from your nearest electronics store (Canon G9, say, or equivalent) with no knowledge whatsoever about photography or panoramic image stitching. Whoever says this is a bad thing is an elitist crank. Of course, this is a good thing. Anything that makes previously difficult things easier for people is (with certain exceptions) probably a good thing.

But there are other elements of this “gigapixel race” that are bothering me. Let me get the first one out of the way. How can I say it politely? Some of these huge images are…… DISGUSTING! Or even worse maybe, BORING! Ok, I said it. Maybe I wasn’t polite about it. I’m sorry. But please. Look at the Corcovado 67 Gigapixel image. Does it look nice zoomed out? Not really – it is full of lines because of certain technical reasons (vignetting was not corrected). Now, zoom in. What do you see? Here is a screenshot: 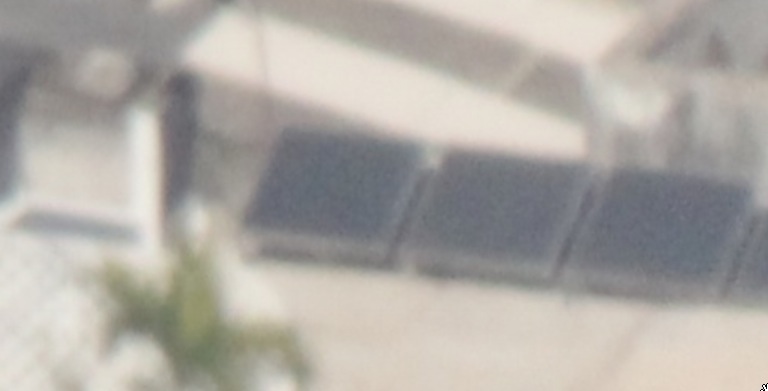 Ok, there is something vaguely recognizable. But let me ask you this – if you bought a digital camera at Best Buy – one of those cameras with a ridiculous megapixel count (more on that later) and you looked at one of your photos at pixel level, and you saw something like this – would you be happy? Probably not. In fact I guess you would immediately return the camera for being defective.

So, how big should the above screenshot be, so that the “pixels” in it are actually “pixels” ?

Well, here is the same screenshot reduced to 1/4 size. I also applied a bit of sharpening, because it was still too soft.

That’s just about right, I guess.Well, it’s better, at least.

So, Luiz Velho, Diego Nehab, Pedro Sander, or Rodolfo Lima – what are you trying to prove? Besides to claim a world record of course! I think what you are proving is not what you intended to prove. You are showing a couple of things.

First, you’ve shown that there is a physical barrier imposed on the resolution of photographs. This resolution is dictated by the earth’s atmosphere. If you look through an 800mm lens as has been done with the above image, you actually won’t see any more detail than if you look through a 400mm lens (unless you’re lucky and you’re shooting on a clear day, minutes after a rain storm has cooled off the surfaces of all distant objects); you will only see how wavy everything looks when you look at such a small detail through so much of the earth’s (definitely non-transparent) air. Even if you had secured your tripod properly, and waited a reasonable length of time for the camera to stop vibrating, and used mirror lockup on your camera (you certainly didn’t do any of these things, because if you did, the image would take a few days to shoot – this appears to have been shot in one day, and the blur on these images suggests the camera was not stabilized so well – yes, time is tricky)

The second thing you’ve shown us is that this “Gigapixel Race” is become silly, the kind of thing that is a domain for hucksters and charlatans – a kind of meaningless benchmark that is impressive only if you don’t know anything about this kind of stuff.

You could think of this gigapixel race as a side-effect of the megapixel race – something that we’ve been benefitting from, certainly, but more often than not, for most humans who buy cameras, is very misleading. The basic idea, if you’re not familiar with it, is that cameras are marketed with ONE specification above all others: the megapixel count of the imaging sensor. People have been led to believe that a 15 megapixel camera makes better photos than a 6 megapixel camera (the truth is in fact usually the opposite). So, while we have been lucky enough to get cameras such as the Canon 5d mk2 or t2i, 21 and 18 megapixels respectively (and “good pixels” at that) most of the time that you see some camera, and its size is megapixels, you’re getting engineering driving by marketing, driven by the human instinct to quantify everything (and presume quality = bigger numbers).

As I mentioned in the beginning of this post, I am myself preparing to make another “world record” image. But I don’t want to be too “silly” about it. Maybe I am getting old, and letting honor get in the way of what is otherwise simply a fun and competitive game to be played among photographers of the world.  But still. I would like most parts of my image to be in focus. I would like elements of the image to be mostly without errors (no lines or other seams between images). I don’t want to magnify the world so that you can see nothing but blurry, defracted water vapor in the distance. I’d like the image to look nice when you’re zoomed out, and also when you are zoomed in.

Remember, you can take a 1200mm lens (one that is available today!) put a 2x magifier on it, and shoot a panorama that’s more than 1 THOUSAND gigapixels. But, unless you did lots of tricks (things that would increase the already enormous shooting time by a factor of 10 or 100) the resulting image would not have any more actual resolution than an image less than 1/10 the size. There are limits to everything, even photographs – some of these limits are bound by the Earth’s atmosphere, not just technology. But I guess we haven’t gotten to the limit yet. And there will be a lot of very silly claims at new world records, with most of these images being viral marketing vehicles and not much more.

So please, gigapixel photographers of the world – remember that there is more to a photograph (even a world record photograph) than how many pixels it contains. Remember why you started photography in the first place? It was to take a photo OF SOMETHING, probably. Let’s not forget that in our quest to push the limits of knowledge and technology.

23 thoughts on “On Gigapixels, Photographers, and Charlatans”